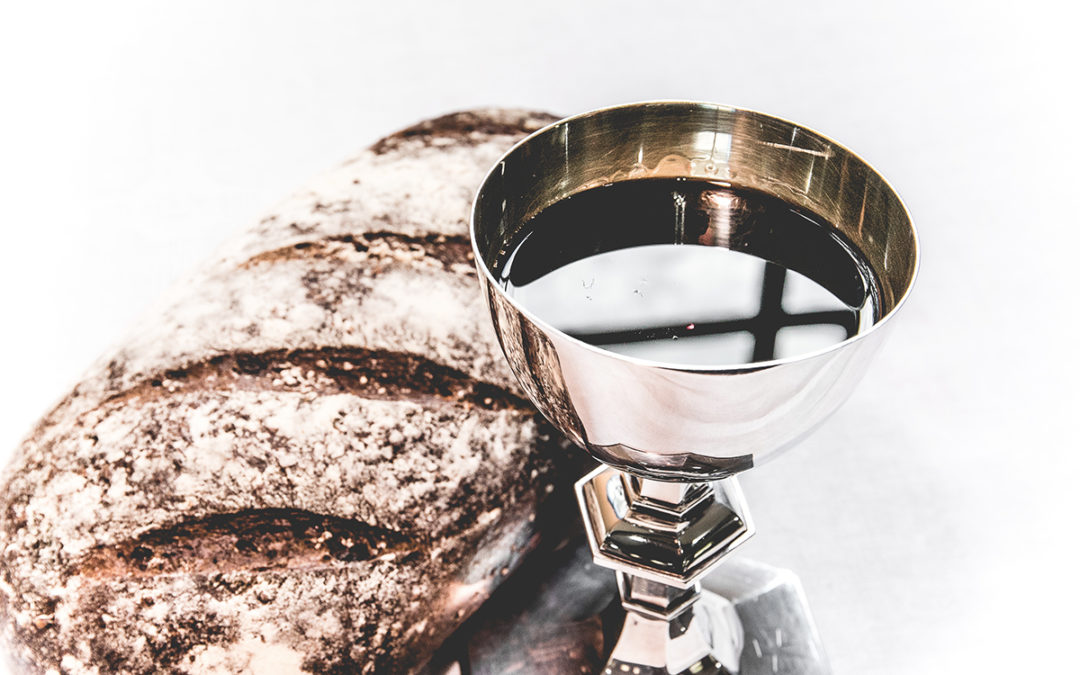 – By Rob Starner and Ron Bryce

On the last evening before He offered up His life as an atoning sacrifice for the sinners of the world, Jesus shared a final meal with His closest disciples. On this solemn occasion He revealed the ultimate reality that the Jewish feast of Passover for centuries had merely foreshadowed. Luke tells it this way:

And he took bread, gave thanks and broke it, and gave it to them, saying, “This is my body given for you; do this in remembrance of me.” In the same way, after the supper he took the cup, saying, “This cup is the new covenant in my blood, which is poured out for you. (Luke 22:19-20, NIV)

For hundreds of years, theologians have pondered what actually transpires during the communion sacrament. One widely held view, referred to as “transubstantiation,” holds that the bread and the wine actually . . . wait for it . . . become the body and blood of Jesus Christ, even though there is no outward change in the appearance of these elements. This view is unlikely for several reasons.

For one thing, it unnecessarily forces a literal meaning on Jesus’ words, when in fact a metaphorical meaning is far more likely. The prolific use of figures of speech was one of the trademarks of Jesus’ teaching. When He told his disciples that they were “the light of the world” (Matthew 5:13), He did not mean that Christians had a laser beam emanating from their skulls.

For another thing, this literal understanding of Jesus’ words would hardly have occurred to The Twelve—they were sitting (well, actually reclining) right beside Jesus when He spoke the words. They could see with their own eyes that the bread remained bread, and the wine remained wine. And we should not overlook the fact that transubstantiation appears not to have occurred to anyone for the first eleven hundred years of the church’s existence. So it is far more likely that Jesus was speaking metaphorically when He referenced the “bread” and “wine” as His “body” and “blood.” Jesus wants His followers to remember that He gave His life as an atoning sacrifice for all. End of discussion. Case closed. . . . . . or is it?

To be sure, the contexts of all the Gospel accounts of the Lord’s Supper make clear that the elements “bread” and “wine” refer specifically to the “body” and “blood” of Jesus of Nazareth and so point to His sacrificial, atoning death on our behalf. This is the deepest and most important core of the Christian faith.

Yet we should also realize that the sacrament of “communion” has an important foundational basis: the solidarity between Christ and His body, the Church—AND, by extension, the solidarity of the members of the Church with one another. This is reflected both in the communal nature of the sacrament and in the solemn warnings about participating in the Lord’s Supper without proper regard for the other members of the Lord’s body (1 Corinthians 11:29).

In the making of wine, the distinctiveness and character of individual grapes are entirely transformed in the process. The purpose, physical properties, and even chemical makeup of the grapes are all converted into something entirely new. Individual grapes are crushed and destroyed so that they are unrecognizable and “dead” to their old existence, but they are reborn and integrated, each within ALL the others, and together united for a common purpose. Any malicious microbe from without or malfunction from within will adversely affect the entire batch of wine. WOW!  What a model for the church!!

Now consider the bread. Where does it come from? Wheat. Right! But bread isn’t merely the result of joining together individual grains of wheat. They too are utterly crushed, ground up, and destroyed so that they lose their individual identities. The new creation, a loaf of bread, has completely different physical properties and purposes than the former grains of wheat.

Even more profoundly, grapes and grain are the procreative part of the plants. Before they were converted, they served a purpose, namely, to reproduce themselves according to their own image and likeness. After death to their old self, however, the grapes and grain are reborn into bread and wine, with a new purpose—not to independently perpetuate themselves, but to interdependently become something beyond themselves.

In this we find an analogy of what happened to us sinners when we died to our previous sinful nature and became born again into the body of Christ. Our old (pseudo) identity was lost and we found our new (true) identity as one body. We have a new identity and purpose in Christ! Rather than our old nature and its self-promotion, we have a new nature in solidarity with Jesus and all the other members of His body.

Comments?  What do you think?